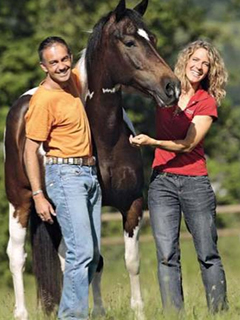 From 1995 to 1999, Andrea Eschbach studied in Basel, Switzerland. After graduation, she began working as a physiotherapist, where she eventually experienced therapeutic work with horses. Even as a child she spent much time at the nearby horse stables and took lessons in classical style (dressage, jumping). For years, she also gained experience in the American West, riding horses and hiking. During recreational riding, she discovered the “natural way”—riding free with a loose, bitless bridle. Since 1999 she has taught with her husband Markus. She has also taken basic and advanced courses in Linda Tellington-Jones’s “Tellington Equine Awareness Method” (TTEAM). She has worked with Gawani Pony Boy, Heinz Welz, and Peter Pfister. She holds certifications to teach in Switzerland, Germany, the Netherlands, and England.

Markus Eschbach spent half his life in the saddle. From 1990 to 1993 he studied in Basel, Switzerland, training as a social worker. He then began his work with disabled children and adolescents through therapeutic riding lessons. Later he discovered Fred Rai and Natural Bitless Riding. Fred and his work left a deep impression on Markus. He began his training as a riding instructor and horse trainer in Fred’s Training Center in Dasing. He continued his journey of discovery with Gawani Pony Boy (USA) and Heinz Welz (Germany). After many years of learning and discovery, he eventually merged all these influences with his own precious years of experience to Natural Riding and Horsemanship.

In 1998, Mark ran the riding and training center for Native American riding at Finca Verde, Tenerife, Spain. There he and his wife Andrea gave lessons to beginners and advanced students in Native American riding, horsemanship, and round pen training. There was great demand for Mark and Andrea to teach courses abroad, including in Switzerland, Germany, Holland, and England. Horse owners could bring their problem horses to these training seminars, and they could learn to establish communication with their horses again. Mark managed to give horse owners an effective method in hand to better communicate with their horse and work as a successful team. This created a new, harmonious partnership between horse and man.

Since February 2008, they have lived with their two daughters, Livia and Alina, in Germany.

By Andrea and Markus Eschbach

How to Speak Horse: A Horse-Crazy Kid’s Guide to Reading Body Language and “Talking Back”