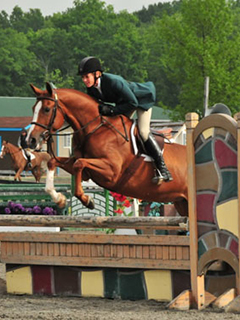 Anne Kursinski is a five-time Olympian, two-time Olympic Silver Medalist, author, clinician, and international competitor, and is one of the United States’ most accomplished and respected show jumping athletes. Anne is known for her fluid, classical, American riding style.

Anne has been representing the U.S. for over 30 years. She started her international career while still in high school, competing on the U.S. Nation’s Cup Team at Spruce Meadows. In 2008, she went to her fifth Olympic Games in Hong Kong, as the U.S. Gold Medal Team’s reserve rider.

In 1983, aboard Livius, she won individual and team gold medals in the Caracus, Venezuela Pan-American Games. She became the first woman to win the Grand Prix of Rome, Italy, in May of 1983. She has been a member or alternate member of 5 U.S. Olympic teams (Los Angeles—alternate—Livius; Seoul—team silver and individual 4th place—Starman; Barcelona—team 5th place—Cannonball; Atlanta—team silver—Eros; and Beijing—alternate—Champ).

Anne Kursinski’s Riding and Jumping Clinic: A Step-by-Step Course for Winning in the Hunter and Jumper Rings