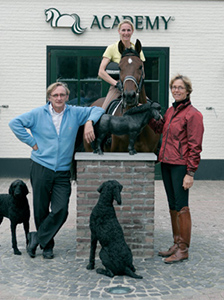 Once a practicing psychologist, Joep Bartels left the professional field when he took up riding. He has served as editor and writer for a number of equestrian magazines, and President of the International Alliance of Equestrian Journalists, as well as authoring several books. He now dedicates his time and energy to the Academy Bartels—a unique equestrian enterprise focused on the development of innovative educational projects for the betterment of horse and rider.

Tineke Bartels was a successful show jumper and event rider before switching to dressage in the 1980s. She was a member of the Dutch national team for 13 years, winning two Olympic silver medals. Today she is “master coach” for the Dutch Olympic Committee, coach of the Dutch Junior and Young Riders team, and trains her daughter, Imke, silver medal winner at the 2008 Olympics in Beijing. This is her third book. The Bartels live in Hooge Mierde, The Netherlands.

By Tineke and Joep Bartels

Ride Horses with Awareness and Feel: The New Dressage Training System from the Dutch Olympians at Academy Bartels