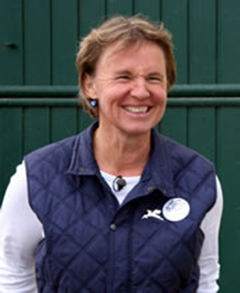 TTEAM and TTouch Instructor Bibi Degn was awarded the Tellington TTouch Instructor level for dogs and horses in 2002. Bibi’s unique contribution has been the creation and development of the “Angie’s” program (Tellington Method for children and youth). Her special interests include teaching the “Angie” courses and spreading the Tellington Method as a therapeutic and educational system for youth. She is also interested in the importance of the work under saddle in the training to become a TTEAM practitioner. Elements from Connected Riding and many years of close work with Peggy Cummings have contributed to it.

Bibi was born and raised in Austria. Her involvement with and dedication to animals began early on. Colonel Neufellner was her riding instructor in her childhood. Bibi earned the Bronze Reitabzeichen at the State Stallion Stable Paura. She participated at western trainings with Jean Claude Dysli. Her other accomplishments in the equine world include: she is a trail ride leader; she participated actively and successfully at several fox hunts, cross country and long distance races; she won and placed second at several long distance races both on the national and international levels.

Bibi earned a degree in studies pedagogic as a elementary school teacher and she studied, extensively, veterinary medicine and psychology without a degree. Bibi also owned/managed a breeding and boarding stable for Arabian horses in Austria and kept the studbook for the Arab breeding club. The dog breed Magyar Vizsla from Hungary was another specialty of Bibi’s. At her farm, she took care of many horses and dogs and other species for many years.

During 1985 and 1986, Bibi stayed in Andalusia, Spain while she learned dressage and established many contacts in the riding style of southern Spain. Here too she participated in long-distance races and long trail rides.

1987 was a banner year for Bibi when she first came in contact with TTEAM during a long distance ride in the USA. She met the TTEAM Practitioner Tina Hutton with whom she spent many weeks during the following years. Bibi was introduced to Centered Riding and started incorporating this as well as TTEAM to her training. Bibi participated in many TTEAM Trainings, mainly with Linda Tellington-Jones in Germany and in the USA.

Today Bibi Degn lives in Neunkirchen-Seelscheid, Germany and she is working to found a Educational Academy for humans and animals with the Tellington Method and Animal Ambassadors as their focal point.

My Horse, My Friend: Hands-On TTouch Training for Kids