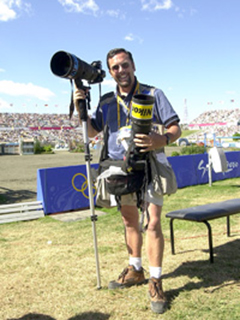 Charles Mann first started photographing horses in the mid-1970s. Primarily self-taught, Mann has had the opportunity to work with various professionals over the years, including “stock photography impresario” Jon Feingersh of Rockville, Maryland. Since then, he has covered the 1996, 2000, and 2004 Olympic Games; the 2002 and 2006 World Equestrian Games; the 1999 and 2003 Pan-American Games; and countless other major equestrian events of all disciplines. His photographs have been featured in—and on the cover of—magazines such as Sports Illustrated, Western Horse, EQUUS,Horse Illustrated, Dressage Today, Practical Horseman, Young Rider, and Chronicle of the Horse, and have won numerous awards, including the American Quarter Horse Association’s Steel Dust Award, the American Horse Shows Association Media Award, and the Chronicle of the Horse Photo of the Year.

Mann’s work was featured in the 2006 exhibit Equine Elegance, displayed at the famous International Museum of the Horse at the Kentucky Horse Park, Lexington, Kentucky, where his spectacular images from unexpected angles dazzled audiences from around the world. When not on the road in search of the next great equine image, Mann lives in Maryland. Visit his website at www.cmannphoto.com