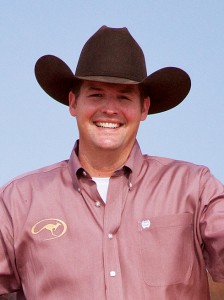 Clinton Anderson was born and raised in Australia, where at the age of six his family recognized a natural ability with horses and cultivated his interest, buying him his first horse at age nine. Whe he was fifteen, he apprenticed with nationally acclaimed horse trainers Gordon McKinlay and, later, Ian Francis. During this time he started and trained over 600 horses, and three years later, he used his knowledge and expertise to start his own horse training facility.

In 1996, Clinton came to the United States and worked with Al Dunning, winner of multiple American Quarter Horse Association (AQHA) world championships, and five years later, he became the first horse trainer to launch a “made-for-TV” weekly training program. Anderson won the prestigious El Camino del Caballo (“The Road to the Horse”) colt-starting competition in 2003 and 2005, and currently travels extensively, conducting clinics and speaking throughout North America. He lives at his new ranch in Stephenville, Texas.

Clinton Anderson’s Lessons Well Learned: Why My Method Works for Any Horse