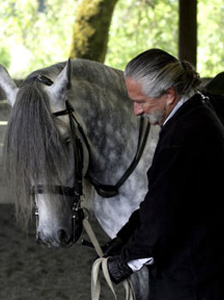 Born in France in 1950, Dominique Barbier began his equine career at a Jesuit school in Poitiers, and at the age of 15 attended Crabbett Park Equestrian Centre in West Sussex, England where he certified as a British Horse Society Assistant Instructor (BHSAI). In 1972, Dominique returned to England to attend the renowned Talland School of Equitation in Cirencester under the instruction of Mrs. Molly Siveright, FBHS, DBHS. For the next eight years, he sharpened his riding skills at a number of highly regarded facilities throughout Europe, following various disciplines, including showjumping, three-day eventing, dressage and steeplechasing. Dominique then based himself in Portugal for two years studying with the legendary Mestre Nuno Oliveira. Through his internship with Oliveira, Dominique’s riding skills were enhanced by perfecting his “mental and physical attitude.” This experience was a defining moment that inspired Dominique’s belief in keeping a horse “light and happy,” known as “la belle légèreté a la Française.”

Since emigrating to the United States, Dominique’s teaching and passion for the “Art of Dressage” has reached many thousands of people throughout the country, as well as North Africa, Europe, Asia and Brazil. His avant-garde philosophy, focusing on the importance of mental communication and the understanding of the horse’s nature has been practiced now for over 40 years.

Meditation for Two: Searching for and Finding Communion with Your Horse

The Alchemy of Lightness: What Happens Between Horse and Rider on a Molecular Level—And How It Helps Achieve the Ultimate Connection

Riding with Oliveira: My Time with the Mestre—40 Years Later