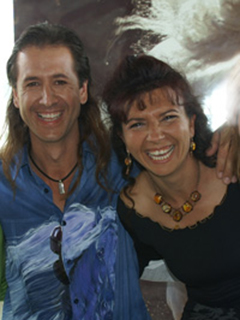 Frédéric Pignon and Magali Delgado were both born to horse-loving parents in the south of France. They both developed quite radical ideas about the treatment of horses and when they married in 2003 it was as if they had been made for one another. Horses became their passion and their family.

An extraordinary Lusitano stallion, Templado, entered their lives and showed them that they had not only much to learn about horses but much to “unlearn.” The only way to tame this uncompromising but beautiful and talented horse was to go along with his wishes. This “reversal of roles” is now the key to their approach, the success of which has been illustrated by Frédéric’s ability to perform in front of huge audiences with up to six loose stallions, and by Magali, who, with her horse Dao, has reached the summit of European dressage competition.

Frédéric and Magali were the founders of Cavalia, along with Normand Latourelle, which toured the United States and European capitals from 2004 to 2009 playing to more than two million spectators. In addition they have worked with such leading figures as Corky Randall (trainer for the legendary film The Black Stallion), Don Manuel Vidrié Gómez of the Royal Andalusian School of Equestrian Art, and Linda Tellington-Jones (who gives them a glowing tribute in this book). When not performing, Frédéric and Magali live in France on their family’s breeding farm, raising horses in accordance with their principles. It would indeed be surprising if we do not soon hear about new exploits of this remarkable duo. Follow them at their website.

By Frédéric Pignon and Magali Delgado

Gallop to Freedom: Training Horses with Our Six Golden Principles