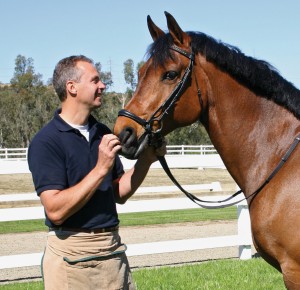 Jochen Schleese has been working in the equestrian industry as a master saddler and saddle fitter for over 34 years and studied and built “gender-appropriate saddles” for over 20 of those. He completed both his journeyman’s and master’s certification at Passier and Sohn in Germany. In 1986 he was asked to come to Canada as the Official Saddler for the World Dressage Championships, held for the first time outside of Europe, and in 2005, 2007, and 2009 he held the same position for the World Cup Finals in Las Vegas, Nevada.

In 1990, Jochen developed a three-year certification program for the trade of saddlery together with the Ontario Ministry of Skills Development. He received a US Patent in 1996 for his innovative adjustable AdapTree® saddletree, which is specifically made for the female anatomy, and he has been featured twice on Discovery Channel (How It’s Made and Harrowsmith Country Life). Jochen has been the recipient of numerous business and industry awards over the years and is featured as a regular educational contributor to many equestrian magazines in United States and Canada. He teaches his Saddlefit 4 Life® philosophy all over the world in conjunction with the German National Riding School, United States Dressage Federation, Ontario Equestrian Federation, Professional Trainers Verband in Germany, and at veterinary conferences in Brazil. Jochen is truly a leader in the concept of saddle fit: he has changed the way saddles are made, sold, and fitted all over the world, with the good of the horse and the comfort of the rider in mind.

Suffering in Silence: The Saddle-Fit Link to Physical and Psychological Trauma in Horses