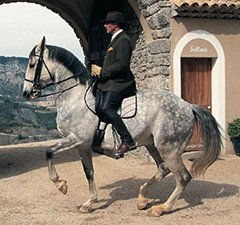 Philippe Karl was born in 1947. In 1968, he dropped his medical studies to dedicate himself to working with horses. From 1968 to 1971, he studied breeding, first at the Zootechnical Studies Center (Centre d’Enseignement Zootechnique) in Rambouillet, then at the French national stud Haras National du Pin. He obtained his national riding instructor’s certificate in 1971.

From 1972 to 1979, he headed the riding department at the Centre d’Enseignement Zootechnique in Rambouillet, where he was in charge of various branches of professional training. From 1980 to 1985, he ran his own stables. During all these years, he regularly competed in eventing and show jumping.

In 1985, General Pierre Durand appointed him as a member of the French national riding school École Nationale d’Équitation in Saumur, and he became an Écuyer at the prestigious Cadre Noir. Being especially dedicated to the shows of the Cadre Noir, he created two historical shows, presentations at the long reins—both in jumping and High School—and participated in the shows of the Écuyers. For thirteen years, he took part in all the gala shows of the Cadre Noir in France and all over Europe.

In 1998, he left the École Nationale d’Équitation to devote himself to the clinics he was giving in France, Germany, Italy, Switzerland and the United States. Since 2004, he has been especially dedicated to the training of riding instructors within his School of Légèreté.