Recognize Your Strengths: If You Can’t See It, You Can’t Feel It

Recognize Your Strengths: If You Can’t See It, You Can’t Feel It

Do you know anyone who is beautiful—not just pretty, but really gorgeous? Most of us do. And does that person think she’s gorgeous? I’ll bet she doesn’t. And the sad thing is that she’ll never feel good about her looks if she can’t see herself the way others do. Riders who lack confidence are the same way: they don’t recognize their abilities, so they can’t possibly have confidence in them. And when they don’t have confidence in their abilities, they ride as if they don’t have those abilities! I have a riding instructor colleague who says, “Confidence comes from competence.” I believe this is true, but I would amend that to say, “Confidence comes from competence and your awareness of that competence.” In order to feel sure of yourself, you must own your abilities.

What do I mean by “own your abilities?” When you own something, you claim it as yours: it belongs to you. When you say, “I can do a really good sliding stop,” you take possession of that skill, and it becomes part of your identity, part of your self-image as a rider. You’re not hedging, you’re not downplaying it; you’re saying, “Yes, this is a skill that belongs to me.” It is an incredibly powerful confidence-builder.

Owning our abilities seems to be a problem for women in particular. (I’m not able to speak for men—someone else will have to write that segment!) From the time that we’re small, we’re taught to downplay our abilities lest we appear arrogant or make someone else feel bad. One of the worst things one girl can say about another is, “She’s so stuck up, she thinks she’s all that.” Confidence has gotten all mixed up with arrogance and being stuck up, thinking we’re “all that.” As a result, we downplay our abilities and exaggerate our weaknesses.

If someone gives us a compliment, we usually dismiss or minimize it. For example, one of my students was admiring another rider’s leg position. That rider’s response? “Oh, but as soon as the jumps get bigger, I’m all over the place!” She couldn’t accept the compliment, and as a result, she couldn’t see herself as having a good leg. She completely missed out on a chance to feel more confident about her abilities.

Owning your abilities is not the same as bragging. Bragging is usually done to make someone else feel smaller. Recognizing your competence, on the other hand, isn’t about comparing yourself to others; instead it allows you to face riding challenges with the knowledge that you are prepared to deal with them. 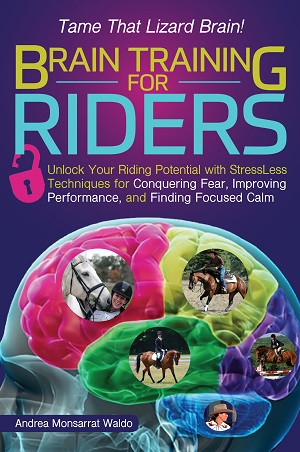