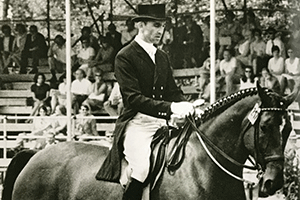 Reiner Klimke was a horse trainer and rider, and he competed at the international level for Germany. He has won multiple Olympic medals, including team gold in 1964, 1968 (both aboard Dux), 1976 (riding Mehmed), 1984, and 1988 (both aboard Ahlerich), and the individual gold in 1984 on Ahlerich.

At the European Championships, he was the individual champion in 1967, 1973, and 1985, and rode on seven winning West German teams (1965, 1973, 1983, 1985, and others). Klimke also competed in eventing early in his career. He was a member of the winning West German three-day event team at the 1959 European Championships, and finished 18th in individual eventing at the 1960 Summer Olympics, making him the best German combination. He also won a Grand Prix show jumping competition in Berlin. He is the author of multiple books, including: Horse Trials; The New Basic Training of the Young Horse: From the Education of the Young Foal to the First Competition; Klimke on Dressage: From the Young Horse Through Grand Prix; and Ahlerich: The Making of a Dressage World Champion.

Basic Training of the Young Horse: From the Basic Education of the Young Foal to the First Competition (with Ingrid Klimke)