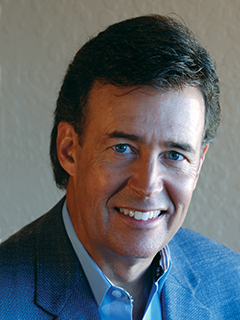 Rick Lamb was born and raised in Wichita, Kansas. He had a passionate interest in horses from an early age but few opportunities to be around them. Instead, he focused on music, going pro and eventually starting a commercial audio recording business, Lambchops Studios, in Phoenix, Arizona.

The recording business was his springboard into the horse industry. In 1997, he launched a syndicated radio program, The Horse Show with Rick Lamb, and followed it up in 1999 with a second, The Horse Show Minute. The radio shows have since won nine awards for excellence.

In 2006, Rick made the jump to television with The Horse Show with Rick Lamb on RFD-TV. His wife, Diana, is director and videographer for this magazine format TV program.

A popular emcee for live horse events, each year Rick appears at numerous horse expos and hosts the popular colt-starting contest Road to the Horse. His expert commentary during this event is considered integral to its success. Rick has written several books, including the modern classic, The Revolution in Horsemanship (with Dr. Robert M. Miller), and Horse Smarts for the Busy Rider. His writing has been featured in Horse & Rider and other top horse magazines. He and his wife, Diana, live in Phoenix with four horses and a cat.

Human to Horseman: A Journey of Discovery, Growth, and Celebration