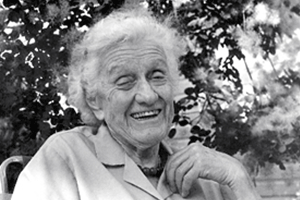 Sally Swift was world-renowned as the founder of Centered Riding® and led a revolution in rider awareness for over 20 years. Many of her groundbreaking techniques for riders were drawn from her use of the Alexander Technique, the study of anatomy, and other bodywork methods used for her own physical therapy to treat scoliosis. The book Centered Riding first took the horse world by storm in 1985 with innovative ideas such as “building blocks,” “soft eyes,” “centering,” and “breathing.” Sally continued to develop her ideas over the years and proudly oversaw a Centered Riding® organization with an active membership and many instructors Sally trained herself to carry on her legacy of good riding. Sadly, Sally died in April 2009 three weeks shy of her 96th birthday. She is dearly missed.