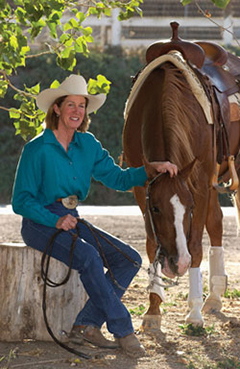 Born in Massachusetts and raised in New England, Sandy Collier has loved horses from an early age. She competed in her first horse show at the age of 6, then continued to compete in events throughout her school years. After deciding that college was not for her, she traveled across Canada, and in 1972 ended up in Santa Barbara, California. At the age of 19, she found work that suited her at the Tajiguas Ranch, where her main responsibilities were feeding, grooming, training, and shoeing the ranch’s horses. Saddlemaking, tack braiding, and breaking horses were duties that were added to her ever-widening range of tasks.

With the help of Doug Ingersoll, Sandy began to compete in events of the California Reined Cow Horse Association showing Quarter Horses. In 1979, she moved to Santa Ynez where she worked for trainer Tom Shelly for one year before going out on her own. She managed a full barn while working part-time as an emergency technician for a mobile life support company and then in a hospital emergency room. In the early 1980s, she began to make a name for herself in CRCHA events with wins that included an open bridle championship, a year-end open hackamore championship, and a Snaffle Bit Futurity open finals placing and ladies division reserve championship.

Collier’s analytical approach to training and her consistency in the practice and show pens are esteemed by everyone who knows her. She credits her aptitude for reining from her English-riding background where dressage is focused on basics. One of her biggest assets is that she strives for constant improvement. She finds what works for her, and can define every aspect of what she does with a horse. While Sandy is totally committed to horse training, she has interests that span beyond horses. She has a zest for learning, considering herself an “overachiever”. She is the kind of person who gets a real estate license when wanting to buy a house and learns to fly when airplane trips spur her interest in aviation.

Affiliations and Positions Held (Current and Past)

Reining Essentials: How to Excel in Western’s Hottest Sport